Saona island and the Tainos

THE SAONA is the largest among the islands adjacent to the Dominican Republic. It is located within the East “Cotubanamá” National Park and measures 105 sq km, with 22 km long and about 5 wide. It is separated from the mayor island by the Catuano Canal, where in 1494 Christopher Columbus took refuge from the first hurricane ever seen by Europeans. Saona had just been named in honor of the discoverer and friend of the Admiral, Michele da Cuneo, born in the italian city of Savona. The indigenous called it Adamanay. It was ruled by the cacique Cotubanamá, hero of the resistance against the invaders.

The climate is tropical, with very little rain, more frequent between May and November. The average temperature is 26 degrees all year round, with a sun exposure of 13 hours a day. The nature of the Saona is rich: cliffs terraces, hypersaline lagoons, underwater grasslands, deciduous forests on calcareous soil, cactus and dolphins, caves and mangroves. And a hundred species of birds including resident and migrant frigates, pelicans, doves, gulls, flamingos, woodpeckers, crows, owls and herons.

Saona island is a valuable and extraordinarily beautiful place. One must visit it with gratitude and respect, fascinated by its profile that draws a white and green line made of sand and leaves between the pale blue sea and the dark blue sky.

THE TAINOS went from the Orinoco region and settled the Antilles before the arrival of Columbus. The impact with the conquerors was fatal for them and they died out almost completely, although their genetic heritage survives in the current dominican population. They had a skin of the color of copper, dark eyes and smooth black hair. They painted the body with vegetable dyes, cultivated yuca to obtain the bread called casabe, fished and gathered fruit. The costumes of these farmers, fishermen and experienced sailors were those of a peaceful community, with an animist religious system based on effigies named cemíes, on ancestor worship and ecstasy ritual of their bosses, or caciques, and shamans, or behiques, through inhalation of hallucinogenic dust called cohoba. Its main party was dancing the areíto.

From their culture remain, as well as various dietary habits, a repertoire of trigonolites, stools, amulets, earrings and necklaces, stone circles, pottery, tools and cave paintings (visible in various dominicans museums). And many place names and words in Spanish (sometimes converted into universal), as hammock, tobacco or canoe. In turn, we wanted to give their name to our beach, where various decorative elements recall their art and evoke their legendary presence. 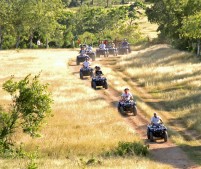 Experience the thrill of driving a buggy or a 4-wheel motorcycle in spectacular landscapes. 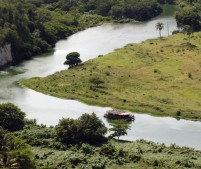 Sensational navigation along a charming River aboard our typical boat. 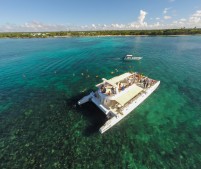 An unforgettable day of snorkeling, relaxation and fun in the island of mapaches.

The gem of the dominican archipelago: a magnificent natural park island for an amazing experience.